In the form of a constellation of photographic images, Traces of a Human Occupation* attempts to articulate a reflection linked to the imprint of man and traces of his occupation in the different landscapes that constitute the territory of the mining basin of the Governorate of Gafsa, a region at the doors of the Tunisian desert.

Today in a crisis situation, the territory has been, for more than a century, under the tutelage of the CPG, the Company of Phosphates of Gafsa, which exploits the deposits. Fragmentary, functioning in synergy, this constellation leaves space for temporal sedimentation, ideas of the palimpsest and heterogeneity able to grasp, in its interstices, plurals landscapes made of multiple identities.

It is to make visible what cannot be seen by privileging the uncertain and slippery identities of spaces and forms, emphasizing the humanity of a landscape, working to develop a form of landscape archeology, through the resonance of temporalities. That of the “remains” of the first human occupations dating from prehistory with that of the “waste” of our contemporary era, that of a landscape turned upside down and upset for less than 40 years by the open pit quarries of the CPG with that of a landscape that naturally formed over a period stretching for millions of years, that of a continuity of an ancestral human presence beside the artesian sources with that of a exploitation of the disproportionate water of the CPG.

*This photographic work is part of the Under the Sand project. 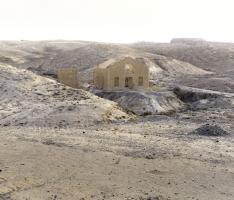 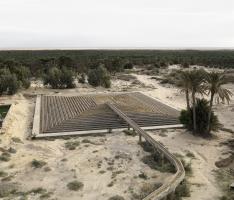 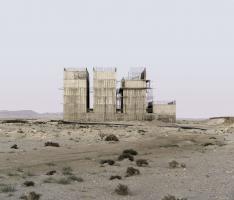 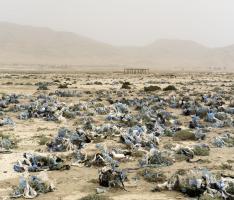 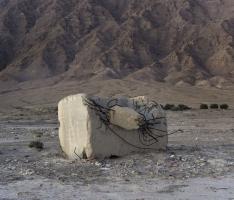 Amelie Labourdette - She obtained her degree in Fine Art from the National Fine Art School of Nantes (Les Beaux-Arts). Recipient of numerous research and production grants, her work has been shown in several exhibitions in France and abroad (United Kingdom, China, Georgia, Italy, Germany). Then in 2017, she is laureate of the grant "Soutien à la photographie documentaire contemporaine 2017" of Centre National des Arts Plastiques (CNAP), for the project Traces d'une occupation humaine (Traces of human occupation). Labourdette interrogates through her photographic work what is located below the visible landscape. She is represented by the Thierry Bigaignon Gallery, Paris, France.