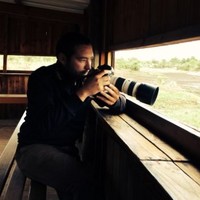 For more than a year and a half, Rodrigo Terrén traveled the routes of Argentina by bicycle, in a project called Visual Travesía, documenting the wonderful landscapes of the National Parks through night photography. He then started to document The mythical Route 40 with Sony Argentina. With a Dakar truck, he traveled through Argentina, Chile and Bolivia in a documentary project. He toured South America in a 1973 Fiat 600 - The journey lasted a year and eight months of adventures, stories and challenges. He travelled through Argentine (Patagonia) and he is currently completing a book about night photography in this country, while driving a 125 motorcycle called Pegasus.

Rodrigo received the Argentina National Award in the Sony World Photography 2015 and was part of the top 50 in the Open category. He also received the Second Color Prize International Competition Start For Global Action 2013 and was awarded second place in the Chile National Award of the Sony World Photography 2012. He was awarded SWPA Student Focus Winner by the World Photography Organisation 2010. He was an artistic resident at the Ecole Nationale Supérieure de la Photographie d'Arles in France 2010 and has taken part in various exhibitions, both national and international. Rodrigo also produced art for the Audiovisual Project Space EPAC - Gallery, Artex Arte in 2013. He graduated from the Argentinian School of Photography as a Superior Technician in Photographic Image in 2010.