My work as a photographer deals with built environments and their relationship with people who inhabit them.
Instead of photographing designed architectural projects, I look for architectural qualities in everyday surroundings.
Out of bounds examines the architecture, spatiality and boundaries of sports fields.
Nearly every sport is at least partly defined by the field on which it is played. The dimensions of these fields can vary
considerably, from a few meters for table tennis, to hundreds of meters for golf. The size and shape of the field are
determined by intricacies of the game: the number of players, the rules, the shape of the ball and manner in which it
is launched.
The field of play is the area of the sport’s activity - the portion of a room or space where the practice of a sport
occurs.
There are boundaries that separate the field of play from the areas that are Out of bounds, which are usually printed

In competitive sports physical boundaries are crucial for the game to function correctly. When a player or ball moves
out of bounds the game is typically stopped. The more professional the level of play, the more rigorously the
boundaries are respected.
Crucial moments often take place at or near these boundaries: the striker aims for the extreme corner of the net, the
point guard hangs behind the arch hoping to secure that extra point. In their intensity, these moments often scuff and
scar physical surface of the field.
These boundaries, planes and volumes define the architecture of the playing fields.

"Thru my photography I am trying to observe and understand the human built environments in relation to their erectors and inhabitants. Life span of buildings outlast that of their creators. They remain standing even if the very reason of their existence or the original function has disappeared. Buildings carry their past with them; I want to photograph their memories." Tuomas Uusheimo

Tuomas Uusheimo - Out of bonds 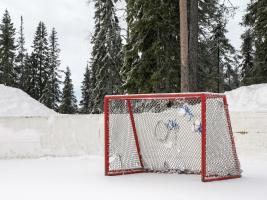 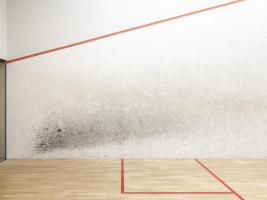 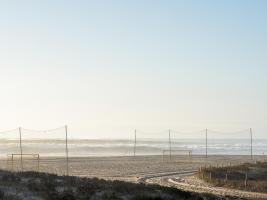 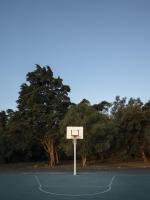 Tuomas Uusheimo is a Finnish photographer working on both commercial assignment and personal projects. The works concentrate on architecture, built environments, designed interiors and objects. He graduated from Aalto University department of architecture in 2004.