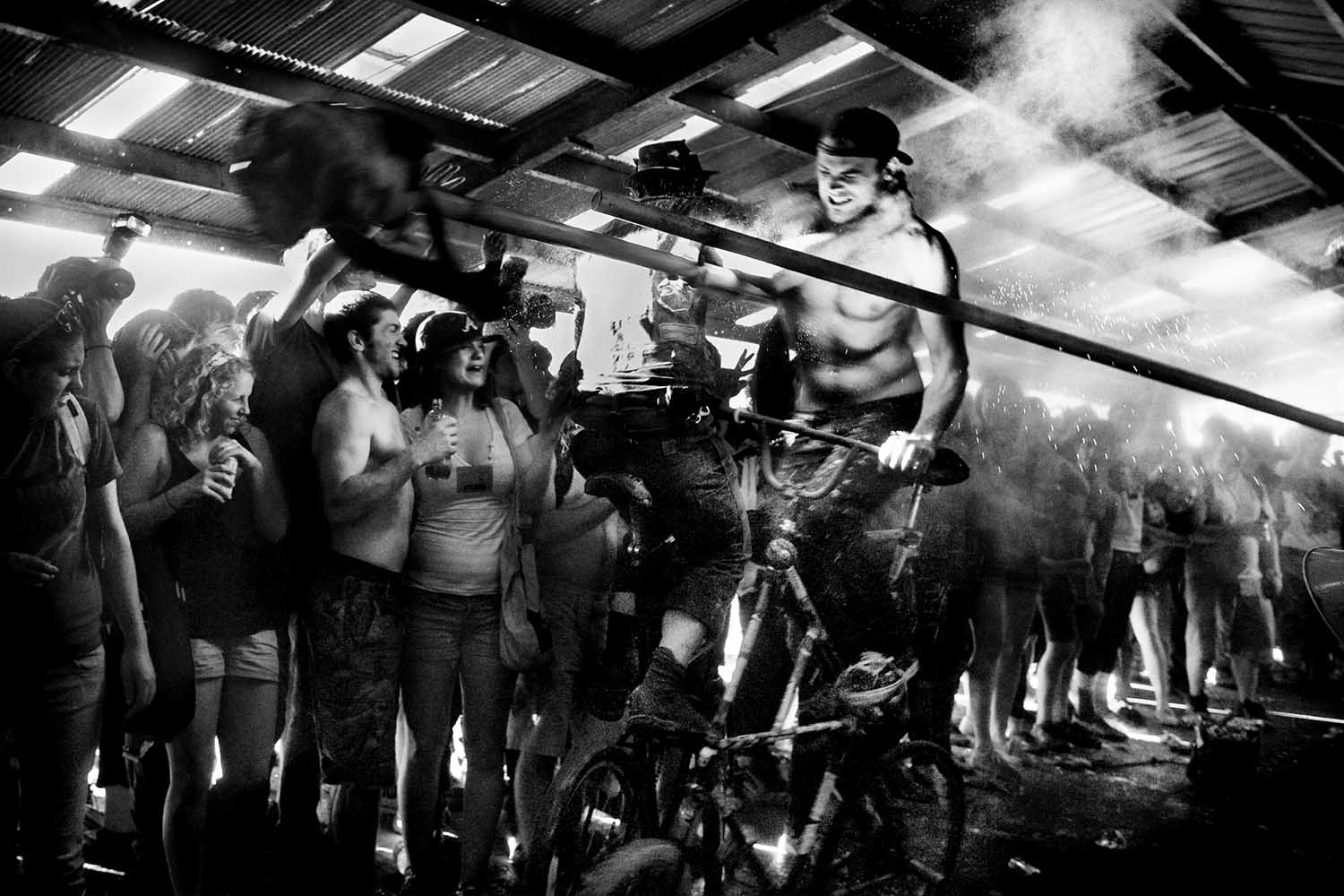 Julie Glassberg was born and raised in Paris, France. After studying graphic design for four years, she decided to make her passion for photography become her life. Her interests are primarily based on the diversity of world cultures, subcultures, underground scenes as well as the misfits of society.

She has been awarded a Lucie Scholarship Emerging Grant, a Getty Images Grant for Editorial Photography, a POYi Award of Excellence, an Art Directors Club Young Gun award, and more recently an IPA award as well as 1st Place for editorial personality portrait at the Moscow International Foto Awards.

Hello! Well, I was introduced to a darkroom very young and once I was exposed to the magic of the red light and the apparition of an image in the chemicals, it never left me. I studied graphic design, and learned very valuable things, such as typography, but it was a bit natural for me to come back to photography as my main medium. It is where I feel the most comfortable to express myself and my curiosity. I like the access that it gives me to plenty of worlds I would never be able to see otherwise, as well as the connection and interaction it creates with certain people. 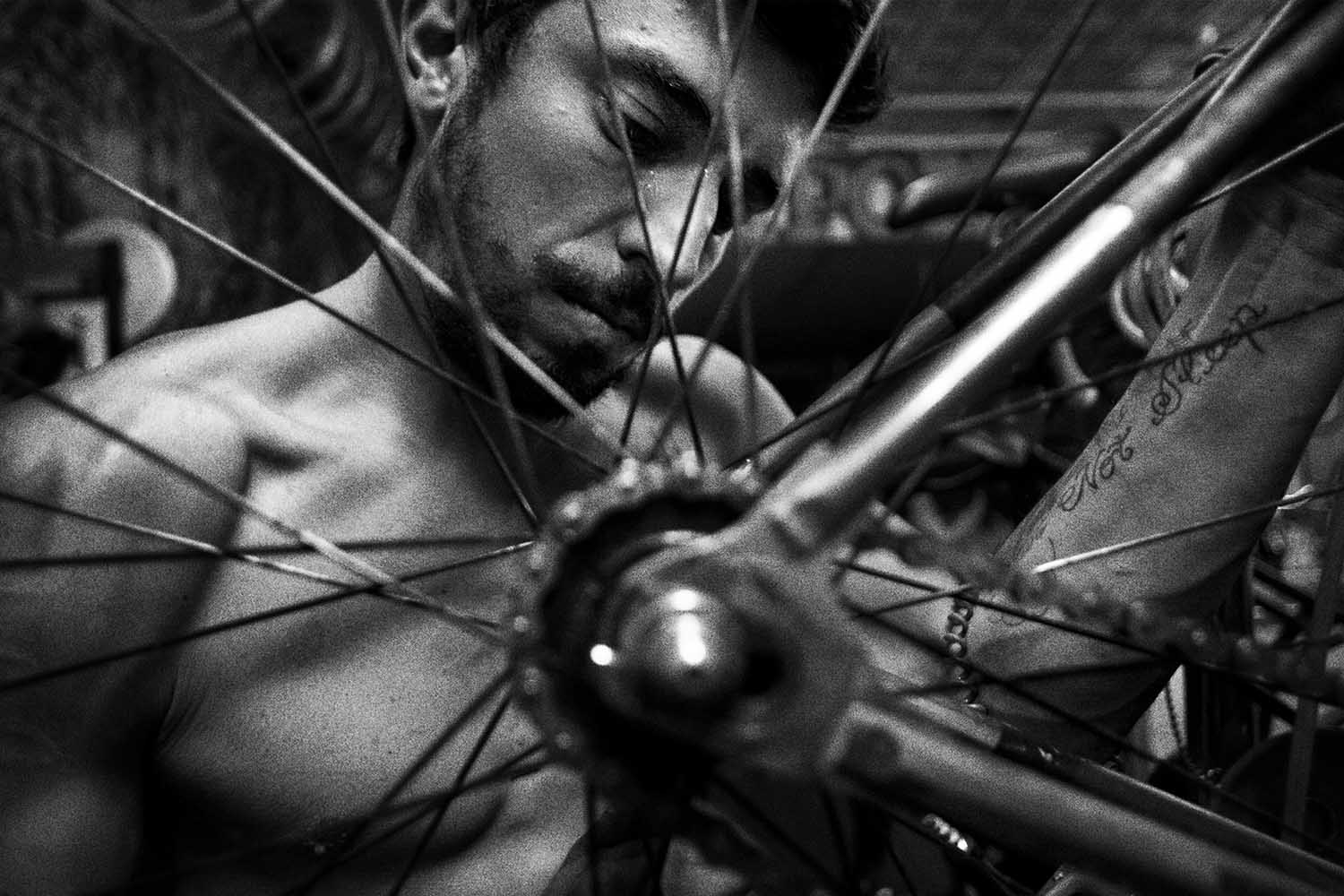 Tell us more about your series ‘Bike Kill’

Bike Kill is a 3-year documentary project I worked on when I was living in New York. The Black Label Bike Club is known as the first “outlaw bicycle club” and was created in the early 90’s in Minneapolis, Minnesota. With chapters nationwide, they are one of the main contributors to the rise of tall-bike culture and organize jousting competitions. It is interesting to see this destructive, rebel culture revolving around such a non-threatening object: the bicycle.

They are an independent community rebelling against the system. In a society that pushes us to consume, focus on money and overly use technology, it is interesting to see a group of young people resisting and fighting against it. Their community is mainly based on the bike culture, D.I.Y (Do it yourself), art and on the real value of relationships; the basic, simple values that seem to have disappeared. This particularly affected me when I was in NYC and many seemed to be living virtually on social networks and obsessed by success. These “kids” felt real to me, speaking frankly and not afraid to take risks and hurt themselves (physically or with life decisions). They are living in the moment, in a riskless society yearning for security. They are passionate, well-read, talented young people with real discussions and I found their mentality and lifestyle quite inspiring. 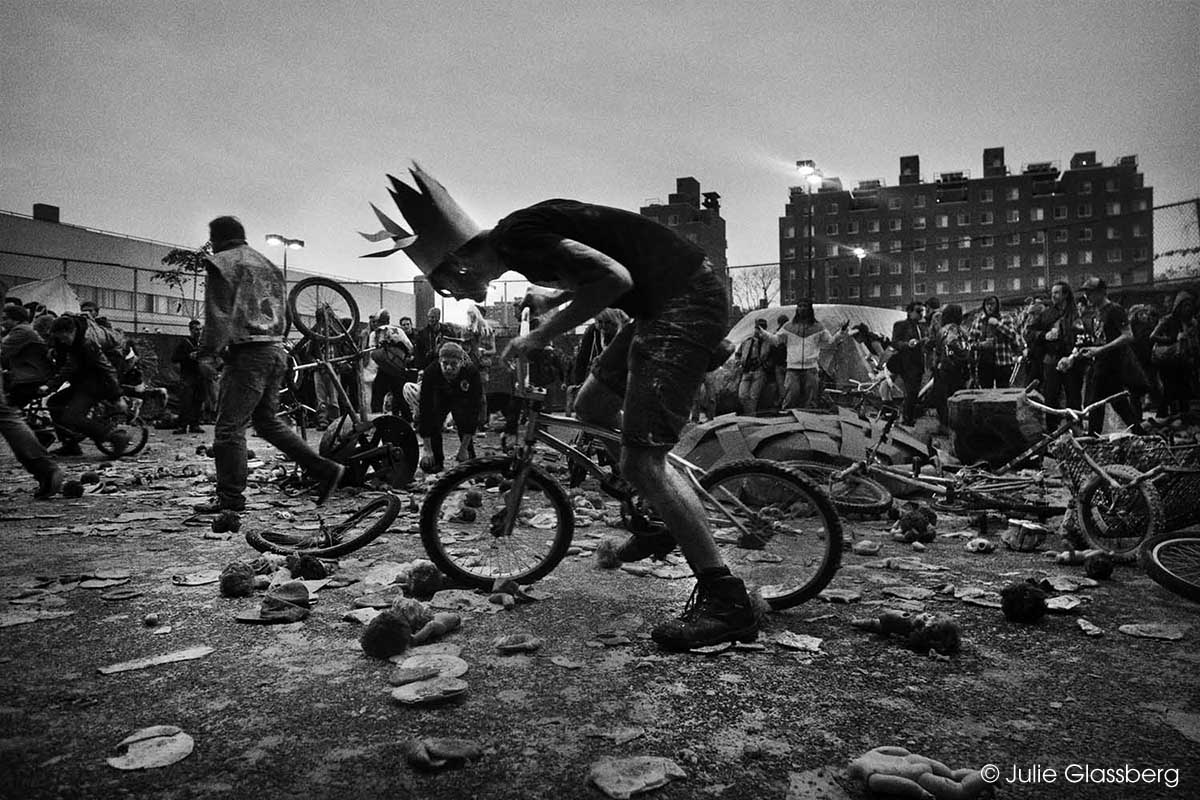 How did you first come across this group and approach them?

It took a few failed attempts in documenting various subcultures in New York city before I came across them. Someone just mentioned them to me and I started researching vivaciously. The more I learned, the more I was intrigued – mainly by the crazy aspect of it at first. After a month or two, I finally meet some of them in a bar in Greenpoint, Brooklyn. They have no interest in being documented, of course. One member, Paul, told me his birthday is the following weekend at the Chicken Hut (the headquarter) and invited me. “What do you like to drink?” I say. “Tequila!” he replies. And when I show up that weekend, I take my first photograph with my little film camera: a group of friends in the kitchen shooting BB-guns.

After that, it wasn’t easy though – it took quite a while to gain their trust – I had to come a few times without taking photos, and sometimes people were suspicious. It makes sense to me. It’s much more about the human interactions you create than the photo itself. First you need to set up a trust, for them, but for you as well. For people to give you some of their intimacy, you also have to give some of yourself. It’s an exchange. After a while, some became close friends. I don't believe in being completely detached from a subject you follow for an extended time. The “fly on the wall” theory doesn’t apply at all times. 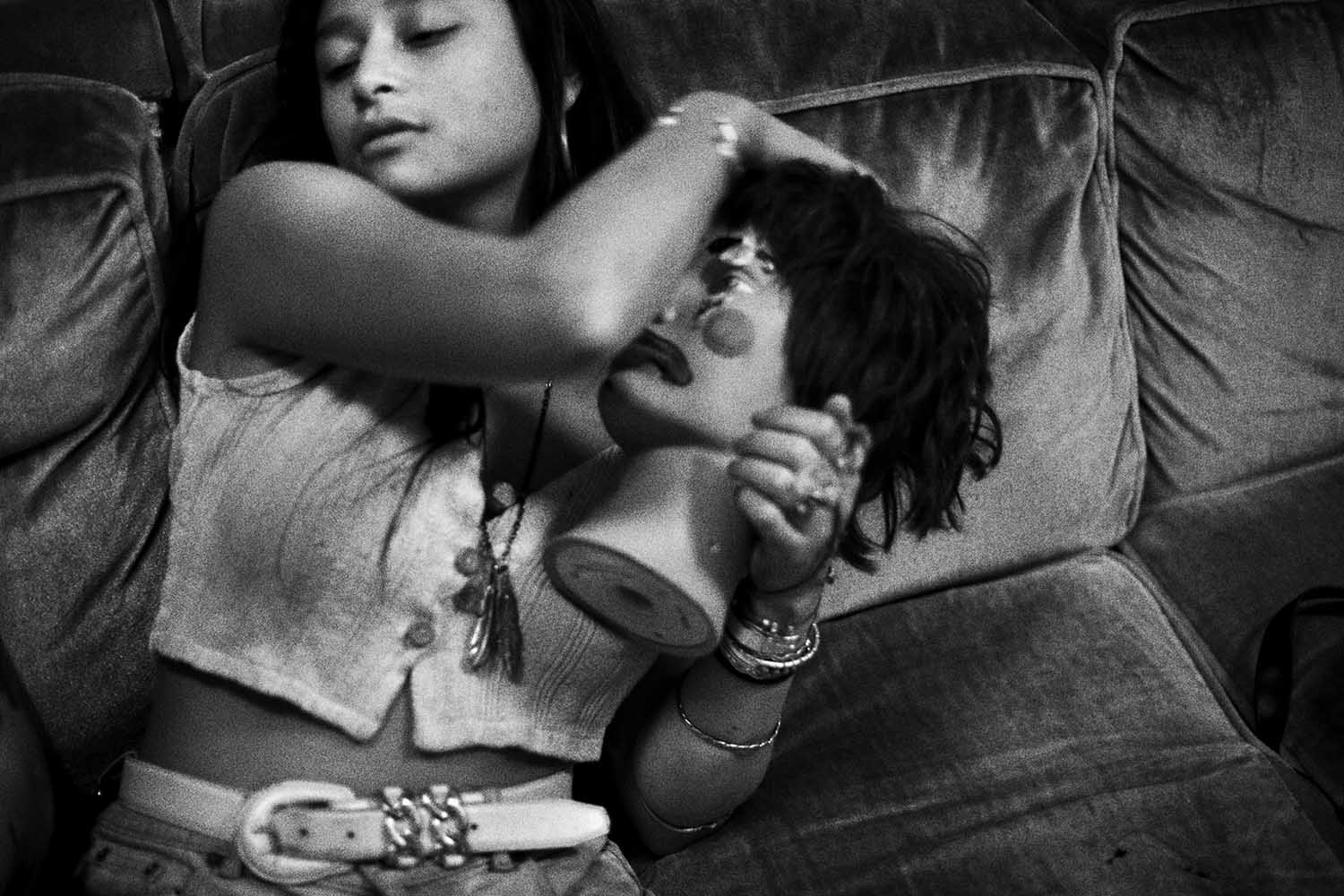 You’ve been awarded a number of scholarships, grants and awards. How important have these been to your career?

Of course when I got my first grant – the Lucy Scholarship Emerging Grant and shortly after a grant from Getty Images, it gave me more confidence about my photography. The sad part, but true part, is that some people had to wait for that “validation” to appreciate my work haha. But that’s part of the game.

It was a great help to motivate me pursue what I was doing, psychologically and financially as well of course. Everything personal is self-financed, so this kind of grants is really a fuel for the project you work on. I’m very grateful to have been able to get this support when I was just beginning, but it cannot be the only motor. You don’t get this kind of opportunity often, sometimes not at all. So the motor should be within and that’s not easy all the time of course. You have to really be passionate about what you’re doing to keep going…

I’m not sure I have a photographic philosophy. I try to be as honest as possible -with the subject and with myself. I might have more a life philosophy: I fight to not be afraid to take risks. Only then, great things happen… If you put yourself in interesting situations, unexpected environments, then the experiences come and therefore the photos. It comes from the guts, from your instinct. Over the past year I have been working more on personal development. I try to go back to the roots of why I started taking photographs. It originally came from the classic street photographers such as Cartier-Bresson, Riboud, or Ronis. It was all curiosity, observations and spontaneous reactions. Sometimes accidents. Not everything was so calculated or overthought. Simple moments of life, gestures that most human beings could relate to. There was more room for magic. I want magic. 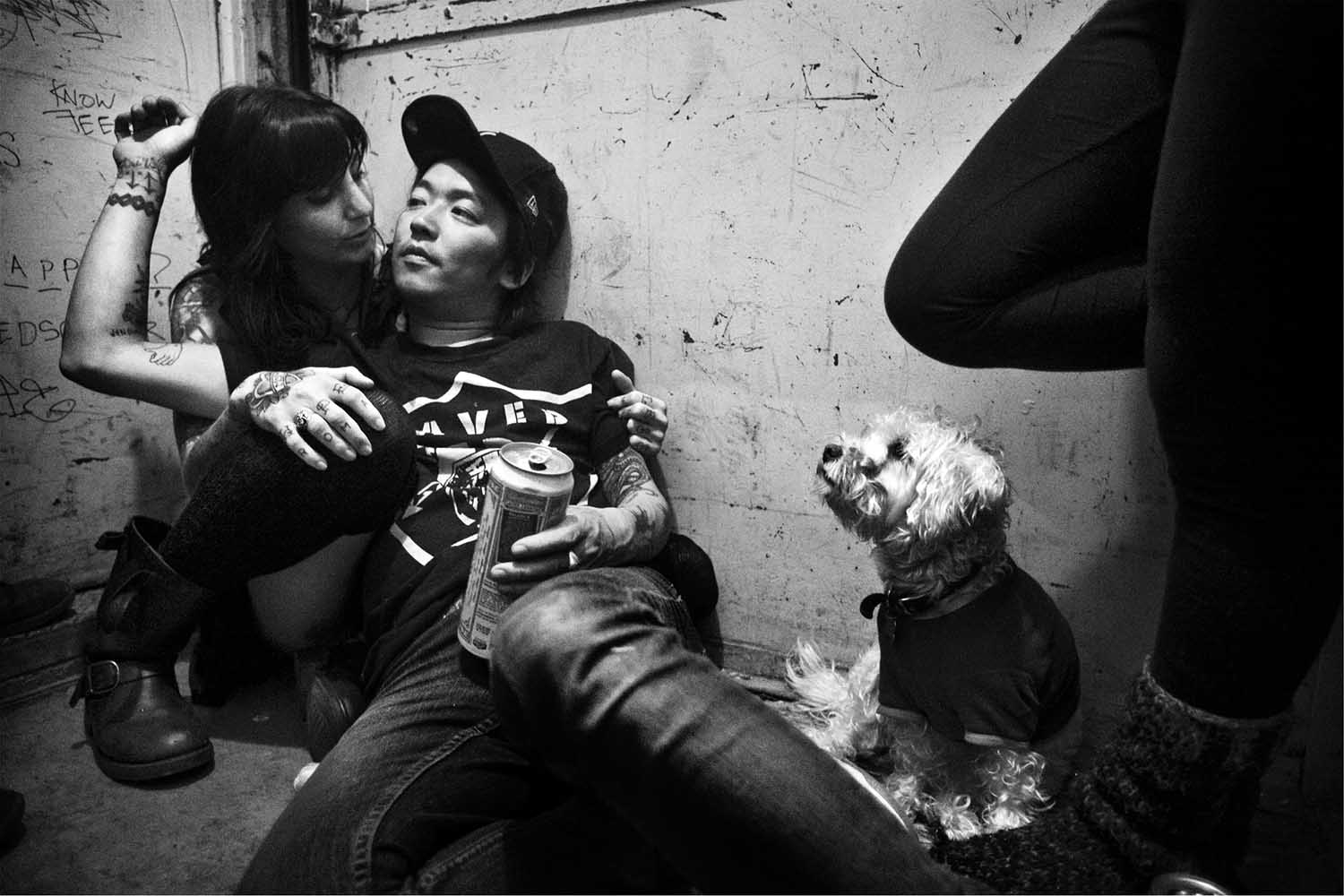 Last year I was living in Japan where I developed a new personal project. I also made my first book dummy (for Bike Kill) – it gave a completely new life to the project, where I could finally show the time I spent with these young people and show more intimate images. And now, I just came back from a 6 months residency in Shanghai with various artists. It was amazing! Just the fact to be around other media than photography (music, performance, writing, sculpture, cinema etc.) was such mind opening. It’s like a complete new world opened to me. I am hoping for more collaborations in the future, try things I would’ve never even thought of trying before.

Now that I am back, I will concentrate on the publication of my book and editing the images I’ve been taking over a year.  I have a lot of editing to do! And for now the future is open. 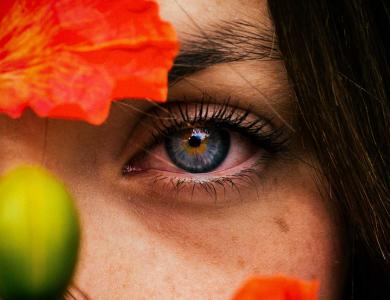 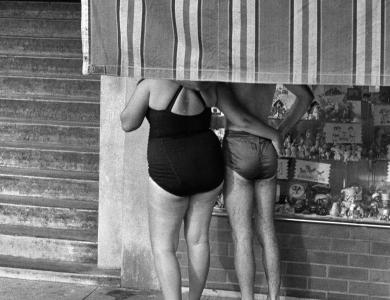