The white man with the tattoos and shaven head is approaching the red dragon. The man who controls the dragon tells me that he can make it breathe fire, but as the event today is mostly for school children he wouldn’t want to scare them. He places his puppet master arm firmly up the arse of the red dragon as the white man with the tattoos and the shaven head walks by. A staffy then runs by with an England flag.

Billy Bragg is on stage singing, the sun is shining down on the protestors at Westminster. Theresa Mays giant head effigy is blissfully anachronistic, like a trophy, surrounded by smiling remoaners. A woman has brought her new born baby with her, a sign tells me ‘our government is off its tits, lets revoke this shit.’ A Brexiteer walks amongst them with a shaven head and a Stop Brexit sticker, he films every remoaner he argues with on his phone. He won. No one changes his mind.

The Brexiteers did not want to take their seats, they only wanted to stand and chant his name, Nigel! Nigel! Nigel! The press photographers gathered at the end of the red carpet, like a line of scrimmage, whilst Brexit Party handlers shouted at them to make way for him. He walked amongst them, flanked by security. A woman screamed, a photographer takes a photograph of her blurred red mouth wide open. Nigel Farage mounts the stage and stands centre forward with his Brexit Party candidates amassed behind him under olympian text stating ‘Change Politics for Good’. The photographers now surround the lip of the stage, ignoring the PR teams pleas, they aim their cameras straight up at him, a heroic low angle. He shouts, he sweats, he points and I feel like I’ve seen something like this before.

Ed Thompson - The beginning of Brexit 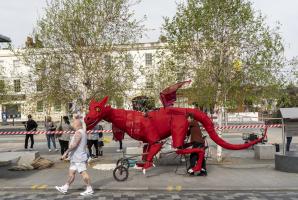 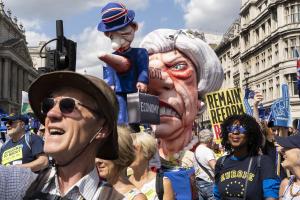 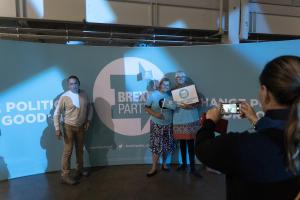 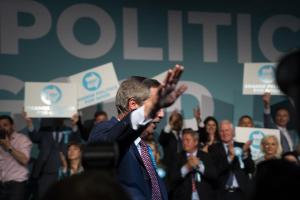 Edward Thompson is a British documentary photographer, artist and lecturer. His photographic work has focused on various subjects over the years covering environmental issues, socio-political movements, subcultures and the consequences of war. He had a life changing experience with an early ‘apprenticeship’ with the Russian photographer Sergey Chilikov, whom he met at the Arles Photography Festival in 2001. That summer Ed stayed with Sergey in Paris and learnt the value of shooting everyday life, eating fried fat and drinking red wine. Sergeys friend Gueorgui Pinkhassov told him how photographing the everyday can allow you to touch at something great. And it did. Since then his documentary photo-essays have been published in international magazines including National Geographic Magazine, Newsweek Japan, Greenpeace Magazine, The Guardian Weekend Magazine, BBC, CNN and The Sunday Times Magazine. His work has been exhibited at Christies, Somerset House and Four Corners Gallery (London) and shown as part of photography festivals in Arles (France), Tampere (Finland), Zingst (Germany) & London (U.K). He’s spoken regularly about photography on television, radio and online, including on Al Jazeera News and the BBC World Service.