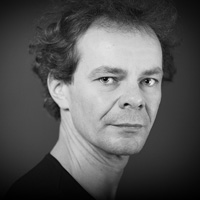 Ralph Gräf was born in southern Bavaria and spent most of his life in Munich. In fall 2006, his scientific career as a cell biologist brought him to Potsdam near Berlin. It was his move to Potsdam that triggered a more intensive involvement with this medium, since here he found friends in the local photo club who gave him a great creative environment to spend a huge part of my spare time for his creative talents. Together with ten of my friends, he is organizing the "Photogallery Potsdam e.V.", a successful gallery project to promote contemporary artistic photography. Since 2010, he has presented his photographic projects in fourteen well-acclaimed exhibitions in Berlin, Potsdam, Munich, Neubrandenburg, Milano and Gorzów Wielkopolski. At the 4th "Kunstallee Potsdam" (an arts fair) in 2011, he won the Arts Prize for his series "The Traveller" in an election of the approximately 4000 visitors. Several photos won prizes or were shortlisted in national and international photo contests. In 2017, he won the travel category in the Sony World Photography Award and the Germany National Award in the same competition.