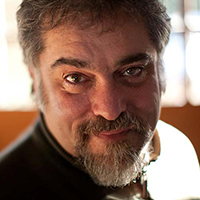 Rich Frishman's photography is in galleries, museums and private collections worldwide, and his photoessays have been nominated for the Pulitzer Prize. His career began with a childhood birthday gift, a simple box camera. Many cameras later, after receiving his Baccalaureate in Communication, he became an award-winning photojournalist, specializing in stories depicting the human condition. Over the past 20 years Frishman has pursued a fine art career, specializing in documenting the human landscape. His intricately detailed images, constructed of hundreds of individual photographs, appear to be single moments but are actually shot over days, months and years. His current project, American Splendor, explores the cultural topography of the United States.