Melting into the scene: exploring the philosophy of images 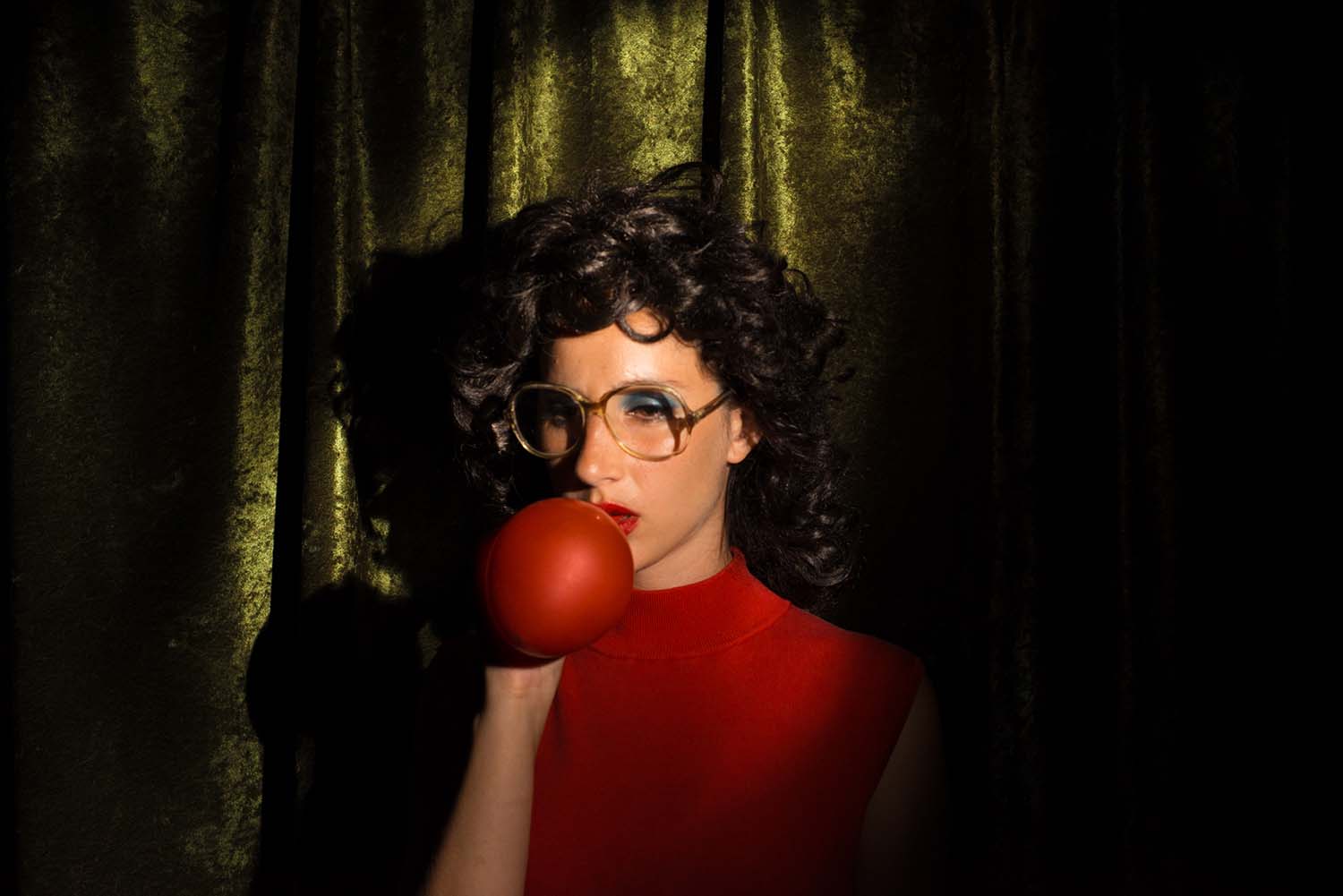 Tania Franco-Klein started her photography career while studying Architecture at Centro university in Mexico City, which took her to pursue a Masters in Photography at University of the Arts London.

In 2017 she won the Mexico National Award at the Sony World Photography Awards.

Considered a young talent in art photography, Franco-Klein's work has been showcased by the likes of Aperture Foundation, The British Journal of Photography, The Best of Photo VOGUE (IT) and I-D Magazine (UK), among others.

She has exhibited in London, Budapest, New York, Vermont and during The Los Angeles Month of Photography 2017, The Lensculture Exposure Awards and Lucie Foundation (USA).

Through the use of staged photography, influenced by her early documentary photography practice and architectural studies background, Franco-Klein generates images that seem to exist both in a fictional and real way. Her narrative carries an ambiguity which encourages the viewer to apply their own story and interpretation, and hopefully, something about our modern-day dual identities.

Hi Tania, please introduce yourself and tell us a little about your photography

I was born in Mexico City and have lived here for most of my life. While receiving my bachelors in architecture in 2009, I had photography classes in the darkroom, where I fell in love with the medium and its endless possibilities. I was always interested in creating scenarios and narratives with my images, so I bought a pair of lights and started learning on my own.

In 2014 I moved to London to receive my Masters in Photography at the University of the Arts. During my time there, I feel as if I began to develop my sense of authorship - a strong connection to my ideas and what I wanted to say with my work. I have always been really interested in philosophy and sociology, not in a formal or academic way, but more as a way to comprehend my own place in the world. I am interested in both observing and understanding our society collectively, and how we react to the “system”  that we are all a product of. I try to create projects that invite the viewer to self-reflect on contemporary life, both in a public and private manner.

My work explores topics of disconnection in everyday life, both within ourselves and with others. I also investigate the different scenarios or social practices that lead to the emotions created by this disconnection. I create tableaux, which consists of constructing sets, altering existing locations and staging scenes. As a starting point, my scenes are created by using the psychological states of what my characters are experiencing. 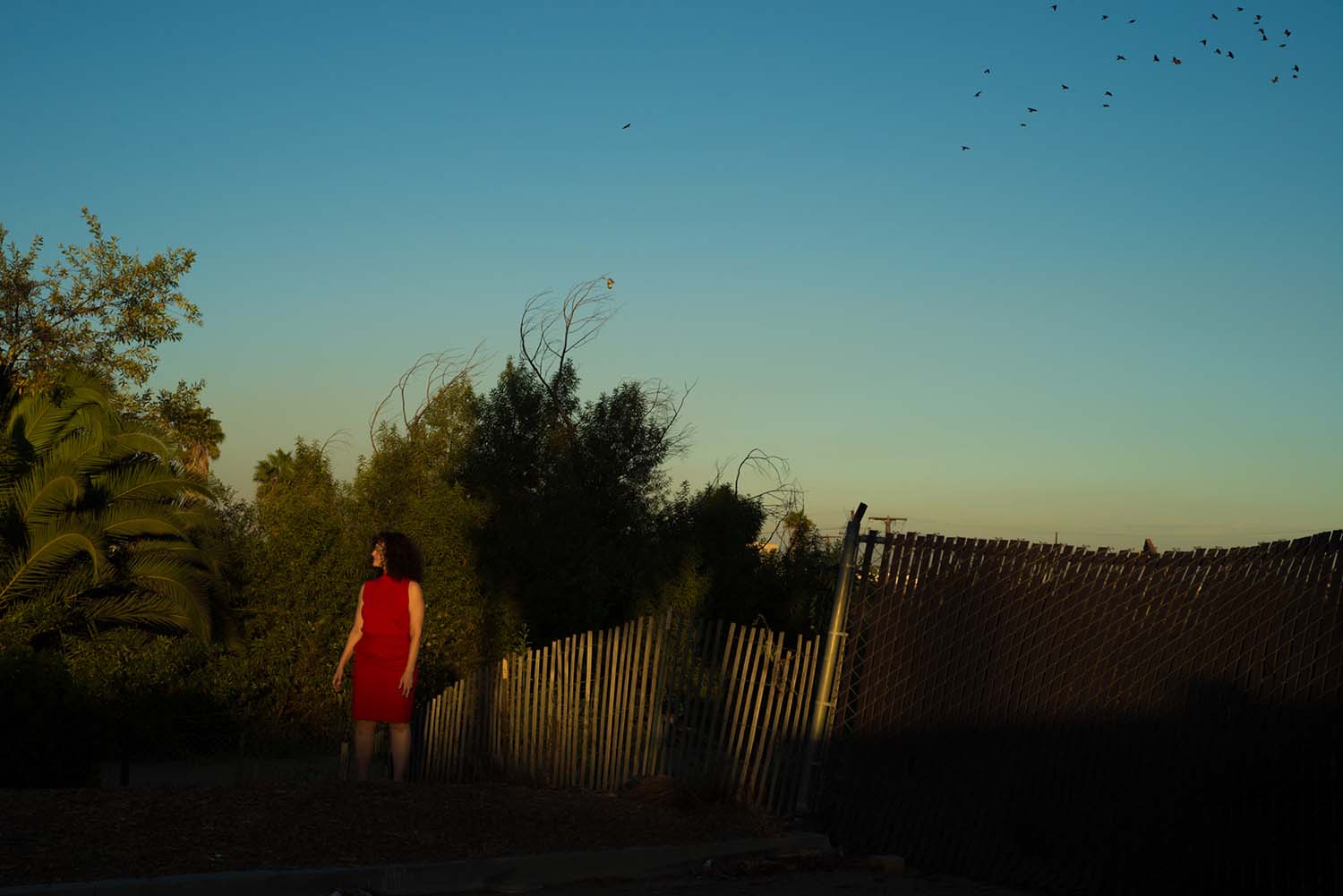 I think today we live in a world lead by images. We are constantly exposed to and shaped by images, and photographs are a universal language on their own. Photography can open different windows into the world and can be a catalyst of reflection with regards to specific topics. It is a language with infinite possibilities. It is a tool that sees outside or inside. In my case, I would say photography has the power to engage in a visual dialogue of self-reflection that is both personal and universal. I use the medium to reflect, evolve and be more conscious about myself and the world we live in. I hope that by sharing my process and my work I can invite others to do the same. 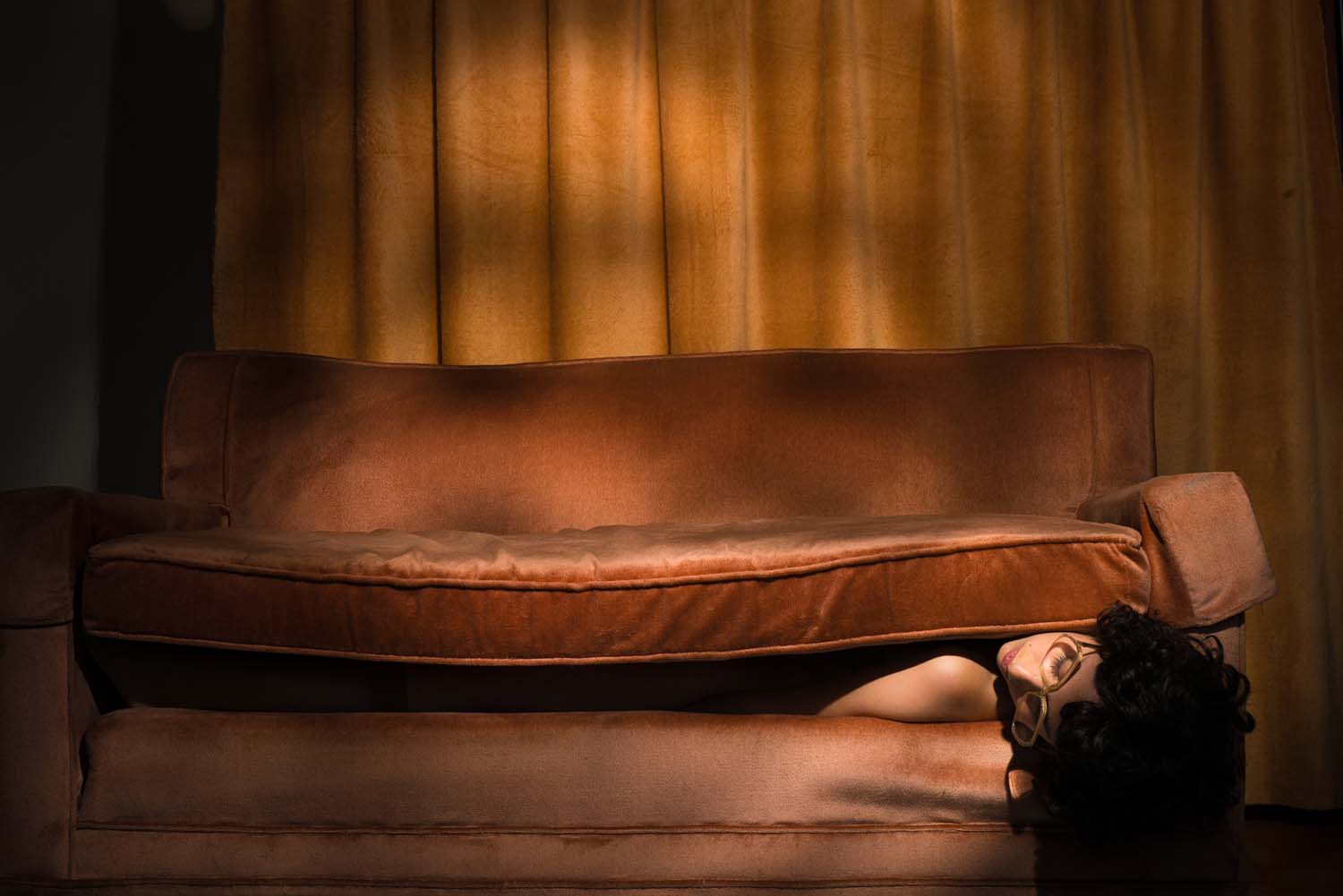 Contained, Self-portrait exists almost like a still-life image. The photograph contains two scenes. In the main scene of the photograph, the character has already vanished from the frame, while in the television, you can see the exact same image but the character is still there. In a way, she has disappeared and is trapped in the image of herself.

The series is Influenced by the pursuit of the "American Dream" lifestyle and contemporary practices such as leisure, consumption, media overstimulation, eternal youth, and the psychological sequels they generate in our everyday private life. The project seeks to evoke a mood of isolation, desperation, vanishing, and anxiety, through fragmented images, that exist both in a fictional and realistic way.

Philosopher Byung-Chul Han says that we live in an era of exhaustion and fatigue, caused by an incessant compulsion to perform. We have left behind the immunological era, and now experience the neuronal era characterized by neuropsychiatric diseases such as depression, attention deficit, hyperactivity disorder, burnout syndrome and bipolar disorder.

The characters in my photographs have the constant need to escape, to always look outside. My characters find themselves almost anonymous, melting in places, vanishing into them, constantly looking for any possibility of escape. They find themselves alone, desperate and exhausted. Constantly in an odd line between trying and feeling defeated. 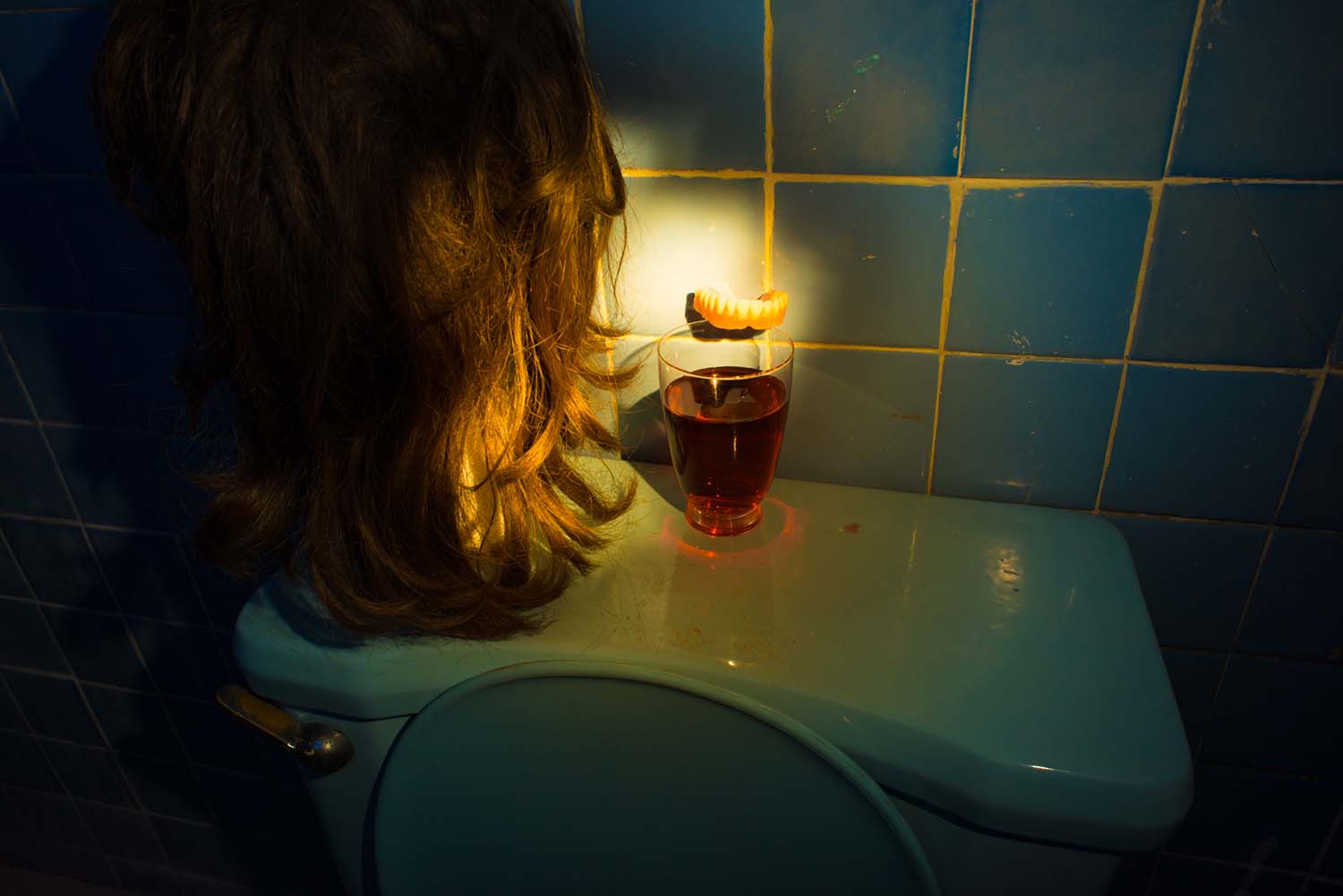 The series seems quite dark and sinister in some ways, but also plays with color and light. What was your intention with the project before you started and how has it evolved?

I started this project in 2016 as an autobiographical work. I can't separate my experiences from my practice, so in a way, it is an extension of my life. I also compliment my own thoughts and emotions with theory. In this case, I implemented ideas from The Burnout Society (Byung-Chul Han) into my life and into my work. It was really important to translate a personal topic into a general one; into something we all experience and we can all relate.

The project began with self-portraits and still life’s that reflected my personal experiences. As the project evolved, it became multilayered. I began exploring ideas from the same topic, that wasn't necessarily drawn from my own experiences.

I think the emotions that I depict in my work are usually the ones that are deemed as negative, but nonetheless emotions that we are all familiar with and experience alone. I think that we all drift between the duality of emotions of what we are experiencing and what we transmit to the world. I also try to explore topics that I feel are not usually talked about because I think there is an obsession with positivity and no space to learn to cope with anything that might threaten what that implies. This series has allowed me to openly talk about these ideas with people I know and also with strangers. I have realized how relieving it can be to empathize and hear the stories of others.

Visually, my work is generally really colorful. Both my lighting and use of color carry a big emotional weight with them. Even though my characters are sometimes absent or completely still in my images, the viewer can understand the emotional catharsis my characters are experiencing and project their own story onto it, as a result of the strong visual presence of color and lighting. 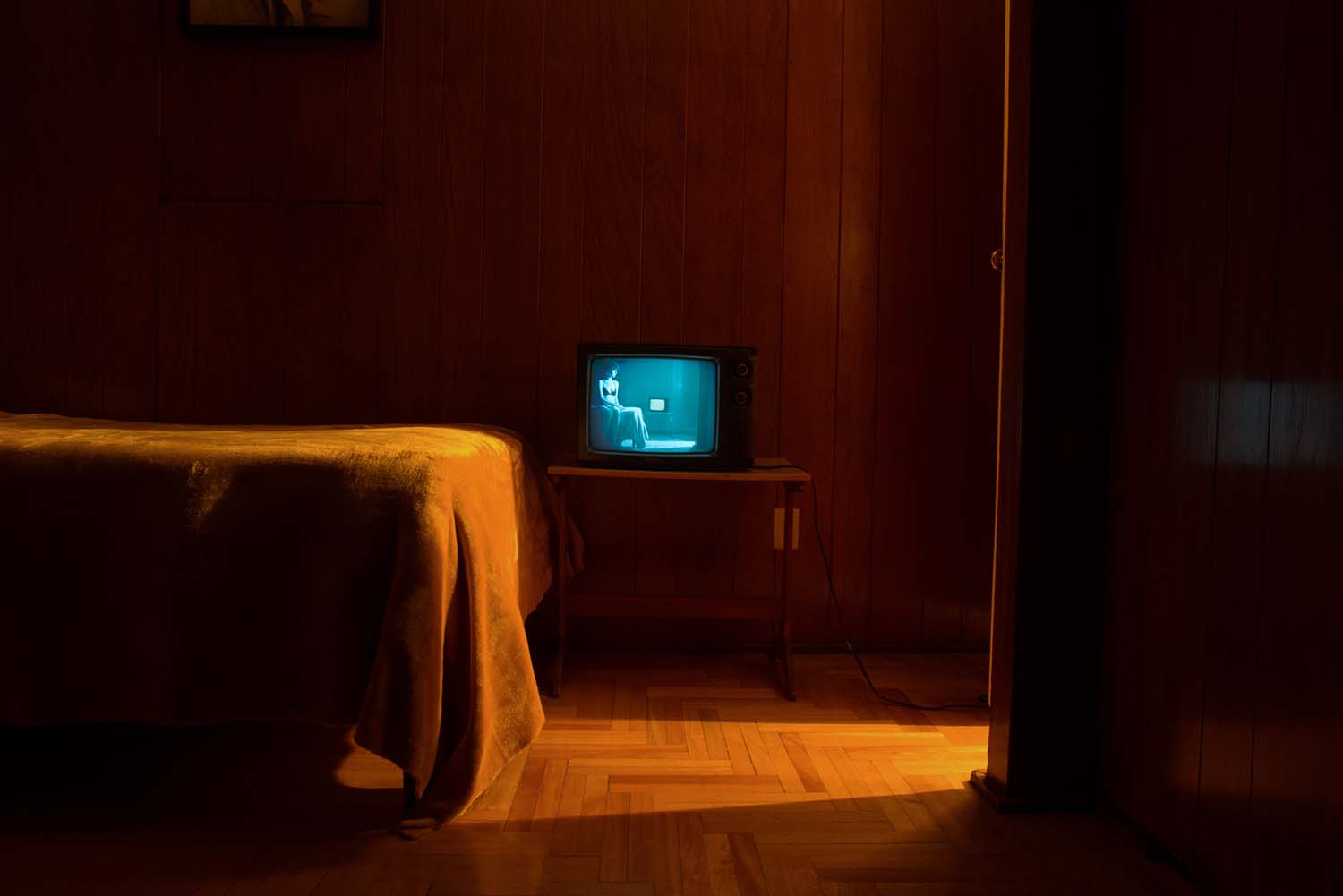 It is important for me to be really honest about myself and my practice. I think there is a big pressure nowadays from the photographic industry, and sometimes that pushes people to fit into some standards instead of following their own path. I think it is important to find what is really meaningful for you and be honest about your process and your practice, whatever that may be.

I also think that amidst the excess amount of images that are produced today, it is important to be conscious of why you are you doing something. For me it is important to engage both visually and conceptually with my work, and to evolve as a person while doing it. If my process and my work don't change me then it makes no sense for me. 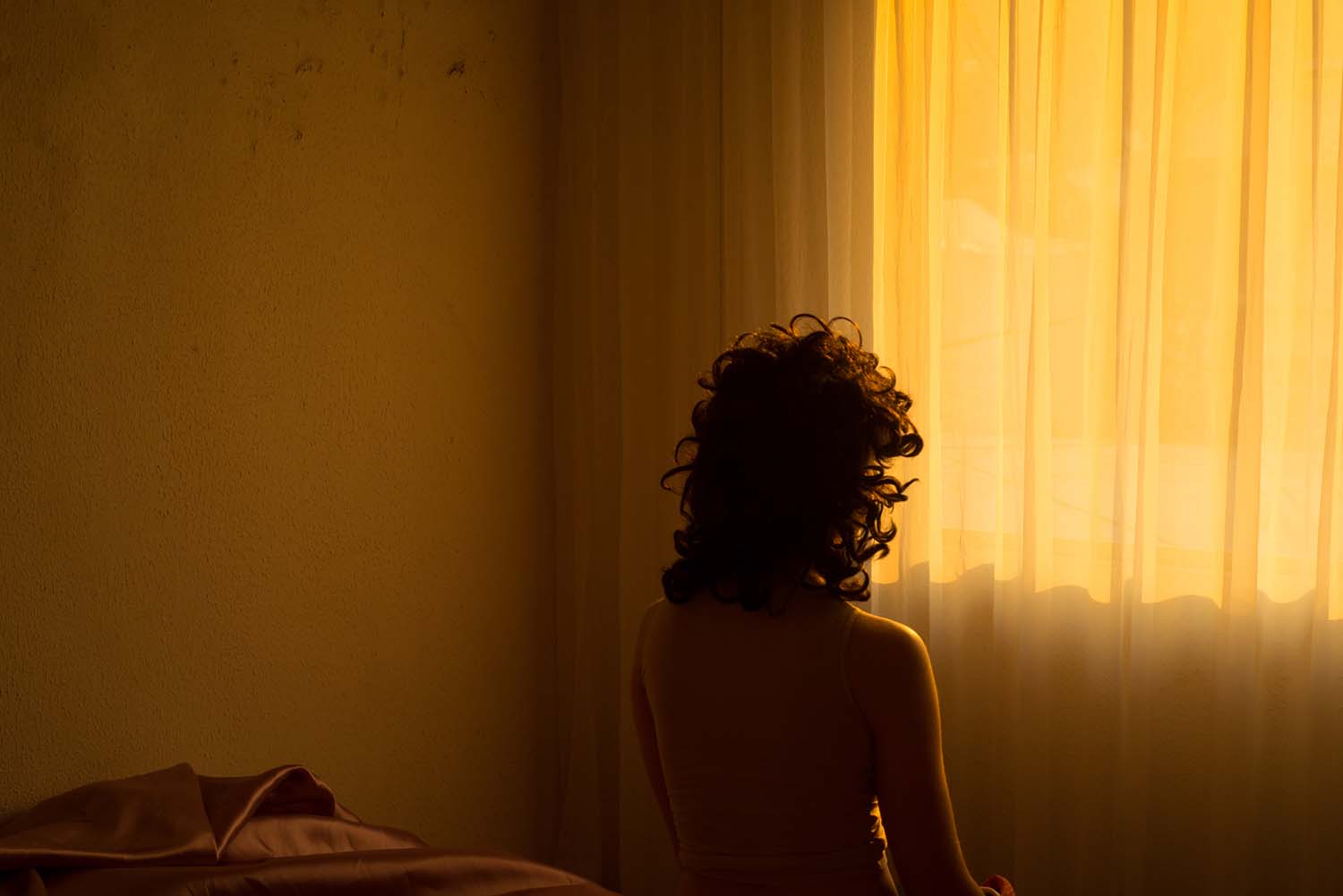 I am currently living in Mexico City and working on publishing a book of 'Our Life in the Shadows'. I am also getting ready for my first solo show in Mexico at Zona Maca Foto with Almanaque Fotografica in September.

Topics of disconnection and contemporary life continue to inspire me to create work, and I am in the beginning stages of a new project that I am really excited about. 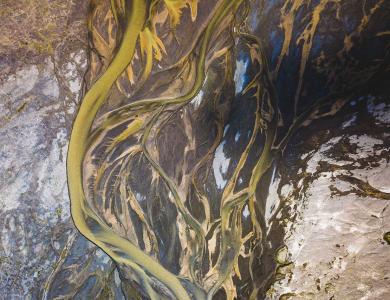 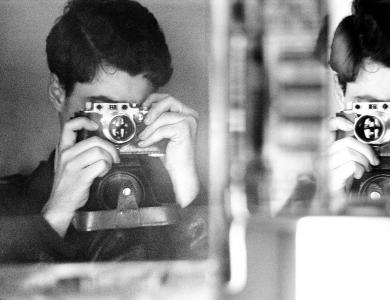 Finding the lost negatives of a young Elliott Erwitt