Claire Rosen is a photographer and video artist blending a fine art sensibility with commercial work to create whimsical imagery inspired by fairy tales, fables, and other children’s stories. Her fashion, fine art and advertising work touch on the bizarre and unusual with the themes of vintage circus, burlesque, magic, curiosities and natural science interwoven throughout the images. Rosen is drawn both to beauty and darkness as it exists in life, and her images explore this duality.

Her series ‘The Fantastical Feasts’, was shown as part of THE FENCE 2015.

Hi Claire. Your narrative, offering reminiscences of Classical paintings and Victorian themes, encounters fashion and commercial photography. How do you combine these artistic languages together?

I think they lend themselves to each other. I can link most of my aesthetic inclinations to my early childhood when a deep-seated appreciation for classical and Victorian ideals were formed. As a result, it is the lens through which I see the world. It is evident in all of the work I produce whether it be fine art, commercial or fashion purposes. A lot of classical art utilises the narrative of universal archetypes. These mythological icons are common to us all. These symbols provide for very effective marketing tools, since the visuals resonate with a diverse cross section of the population. Hence its seamless integration into commercial and fashion photography.

‘The Fantastical Feasts’ was part of the THE FENCE this year, bringing your series to the public’s vivid imagination, recalling familiar images but reinventing it with photography. What inspired you to choose this theme?

I wanted to inspire a dialogue that called on the viewer to rethink our relationship to animals, food, and community in a whimsical way.  I referenced Leonardo da Vinci’s masterpiece, "The Last Supper” for its iconic standing.  In my opinion, it is an interesting time for humanity as we discuss and evolve our thinking about the environment, a global community of different cultures, and the creatures we share this planet with. What does it mean to be connected and part of a community, where and how do we get our food, how are we treating other living things, and what does it mean to be sustainable etc?

The first animal feast was created during a campaign for talented lighting designer, Alex Randall Bespoke. One of her incredible pieces, the Sanctuary Chandelier, re-imagines a solid brass church light from the 19th century, which was traditionally kept burning and "represents the ever-lasting light of Christ in a sin-darkened world.”  Arrangements were made with a small local pig farmer. He agreed to hold off on sending the pigs to market so that we could do the photo shoot. The idea sprang forth from there... since it would be literally their last meal, the reference seemed appropriate in a twisted way.  A few years later, I was in Thailand and came across some Gibbons. After some negotiation with their owners, I was able to create a feast picture with piles of bananas that evening (*literally every banana from every smoothie stand on the entire island was purchased!) At that moment I thought, "This should be a whole series” and started looking for other animals.

The banquet is a historically defining characteristic of culture and conjures up vivid and colourful imagery, plentiful food, exotic recipes, lavish presentations and glorious surroundings. In contrast to the ‘Last Supper’s’ almost rigid organisation and composition, I enjoy the chaos and energy of Pierre Subleyras classic painting, ‘The Feast in the House of Simon’. Also, I have always loved the light, richness, and attention to detail of 17th century Dutch still life paintings. In addition, my childhood was filled with books featuring animal anthropomorphism in illustrated form. It is the melding of all of these elements that has inspired the theme and aesthetics of ‘The Fantastical Feast’ series.

This series appears to have vivid references to ‘Nostalgia’, your previous work exhibited at THE FENCE in 2013. Did the subjects of ’Nostalgia' urge to be investigated deeper, perhaps looking at its direct opposite?

I am typically working on multiple series.  I choose projects that vary in the type of resources and energy they require. These two in particular continue to be worked on simultaneously.  ‘The Fantastical Feasts’ requires a lot of energy and coordination with other people. They take time, money, access, resources, travel, and a surrendering of control.  There is a lot of moving parts…  plus the unpredictable nature of working with live animals! In contrast, the Nostalgia project is quite calming, almost meditative.  The still lives are created alone, in my home, with my objects. Though they may look like chaotic assemblages, they are carefully constructed.  I exercise almost compulsive control down to the smallest button placement.

I think (and hope) that all of my work, not just ‘Nostalgia’ speaks to the same vision and concepts in different ways.  The ultimate goal with my work is to create a transportive experience giving a tangible form to the interior workings of my imagination as I continue to explore the world and my place within it.

Did you have the chance to share your visions about photography with THE FENCE public?

I think THE FENCE is an incredible installation. It does so much for the community; both for artists and the public. It has certainly created a further interest for me in public art and rethinking the viewer experience. I was lucky enough to be invited down to visit the Atlanta Fence by Atlanta Celebrates Photography for a brunch talk and Fence viewing. It was wonderful to be able to engage with the community as I discussed my process and motivations for the project and answered questions. I would welcome opportunities to engage with THE FENCE public further.

What is next for?

I am continuing to work on ‘The Fantastical Feasts’ series. I have a number of images that have yet to be released as well as an extensive wish list of dinners to create! I am also working on the exhibition proposal with independent curator Heidi Aishman and designing the book component for the project. Looking for appropriate venues to host the exhibition. I am developing the charity aspect of the project to raise more awareness for animal related issues by donating a percentage from each print sale to different correlating animal rescue and conservation organizations.

I have a new self-portrait project that is very early in its developmental stages called ‘The Travelling Mouse’.  It features an anthropomorphic mouse travelling around the world and through time, I am still developing the full concept. You can watch the progression on Instagram @followthemouse while I try and figure out what direction the mouse will take the project in…

I am also writing a book on the full creative process from concept generation to execution which is due out in October 2016 to launch at Photo Expo in NYC. And lastly, I am working on my new submission for the next FENCE! 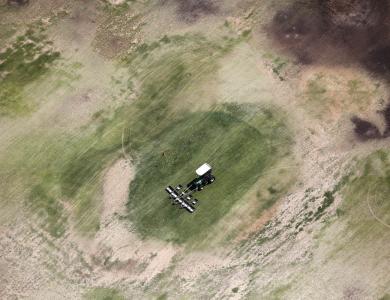