Read our interview with photographer Yukari Chikura, who published her book ZAIDO in 2020 with photobook master Gerhard Steidl after winning the Steidl Book Award.

We’re thrilled to have Yukari Chikura answering our questions for This Week’s Focus. Over the next few days, we’ll be showcasing her series ZAIDO, where she documented an ancient Japanese ritual, on our Instagram feed. Here she talks to us about her personal motivations behind the award-winning project and shares what it was like to work with the doyen of publishing.

Before you picked up a camera, you were a music composer. Why did you decide to switch your career to photography?

Ever since I was a child, I’ve always lived in a world of music. Up until I reached adulthood, I knew very little about the rest of the world outside my direct surroundings. You could even say I was not really allowed to live freely.

After graduating from music at university, I decided to pursue a career in musical composition; something which was self-taught. From that moment on, I composed as if I was in a dream. I was blessed with some wonderful works and I received some honors. But I did wonder: was I unable to pursue any other path in my life? I wanted to experiment with something completely different.

By chance, someone approached me and I entered the world of I.T. The development field was tough, but I felt it to be worthwhile to follow the path I had chosen. However, the sudden death of my father, my own two serious injuries, and the Great East Japan Earthquake left me devastated both physically and emotionally.

In a dream, my father told me to go to a village hidden in the deep snow, somewhere where he had lived. As a result, I decided I would go to Tohoku, the North-eastern region of Japan's main island. It was there that I discovered ZAIDO, a harsh but beautiful ritual that has been going on for 1,300 years. The devotion of the people who perform the rituals and the way they had managed to overcome many difficulties to preserve this culture made me want to also preserve ZAIDO from my own point of view. It was then that I decided to seriously get involved with photography.

Culture and its manifestations are predominant in your work. What is it about this subject that inspires you?

This particular festival (ZAIDO) has been carried out for 1,300 years despite wars, earthquakes, fires, and many other natural disasters that are common in Japan. There have been some major difficulties and challenges – including the sudden death of a performer. However, no matter what obstacles they have encountered, there are people who have gotten up everytime in order to protect their culture. I was inspired so much by ZAIDO.

Connecting with the people you photograph is key to your work, has there been a particularly memorable encounter?

When I was taking pictures of the ZAIDO ritual, I met lots of people. One of the most memorable moments was when I was boarding the train to return home. A large number of villagers came in to see me leave and when the owner of the hostel watched my train depart there were tears in his eyes. I couldn't stop crying, as it reminded me of my father. Everyone is so warm-hearted and welcoming, whenever I return to the village, I feel like I am back in my own hometown.

ZAIDO is an extensive documentary project. Could you tell us more about what’s depicted throughout the series?

The story of this ritual is based on the legend of the "Danbury-choja". It tells the story of how, guided by a dragonfly, a poor couple arrives at a magical healing spring in which sake flows, and they start to make their fortune from it. The ZAIDO festival celebrates this legend. Before the festival, the noshu (performers) perform a very strict spiritual purification, which in some of the longest cases is known to have lasted up to 48 days.

Cold water ablutions are notably performed in the middle of the night to cleanse the body. Furthermore, couples have to sleep separately. Giving birth at the noshu's house, as well as having the noshu visit a house where someone has passed away, is to be avoided at all costs. Among other things, there is also a restriction on eating meat.

Through this project, I wanted to portray the long history of the ZAIDO festival and the people who continue to protect what is important to them, overcoming the many difficulties they encounter in their lives. I hope that this work will be perceived as something more universal and not just as being pertaining to a specific cultural event.

To what extent is it a personal project?

I think that this story is a pilgrimage to bring me closer to my late father. Through the filming and the journey, I felt that my heart, which had been shut up in a deep darkness, was being healed.

Could you tell us more about the process you usually adopt for a project?

Once I have decided on the theme of my next project, I do as much as research I can. Also, aside from taking photographs, I collect data and materials and I also draw pictures. Once I've gathered all the materials I see as necessary, I print them out in small batches and temporarily pin them in a notebook that I will scan. When the editing has been finalised, I transfer it all into InDesign. There, I decide on the font if there is some text. I also work on the layout and other aspects, before I finally print and fine tune the structure. When I am making a dummy book, I make sure that all the materials and colors have a meaning and ultimately I will use my own materials to bind it.

ZAIDO has just been published as a book by Steidl. Could you tell us more about your collaboration with the German photobook publisher? What did you learn during the production process?

When making this photobook, I wanted to showcase a unique view of the world. Through various materials, paper textures and smells, my goal was to create a book that can be experienced on many levels.

When creating this photobook with me, Gerhard Steidl truly experimented. First, through his personal magical recipe, he created a myriad of paper snowflakes. Using a variety of papers, the work that he materialised was poetic. For the introduction of the book, almost like an orchestral introduction that fades in, delicate translucent paper was used, evoking the way the fog gradually clears, giving way to the landscape that emerges. Throughout the body of the book, the paper that was used sometimes had a different texture on each side. To the left of the photos, a snowflake from a reverie can be found on some of the pages, and just like the pale pattern on Japanese washi paper, it is mixed with silver ink to fully create a fantastical look. Next to that, praying for the good health and happiness of this book's readers, I put the traditional Japanese paper fortunes that I folded by hand, one by one. Then, for the night snow, it was not black paper that was used, but lots of black ink. Little by little, the snow disappears and a world of deep, impenetrable blackness emerges. 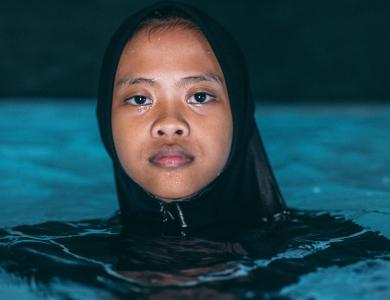 Pic of the month: Marlena Waldthausen 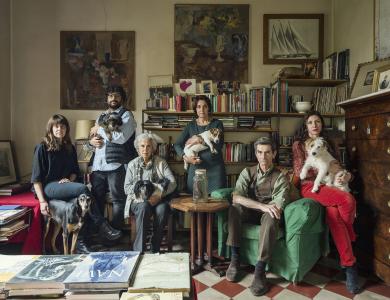 Beyond the Frame: Luca Rotondo